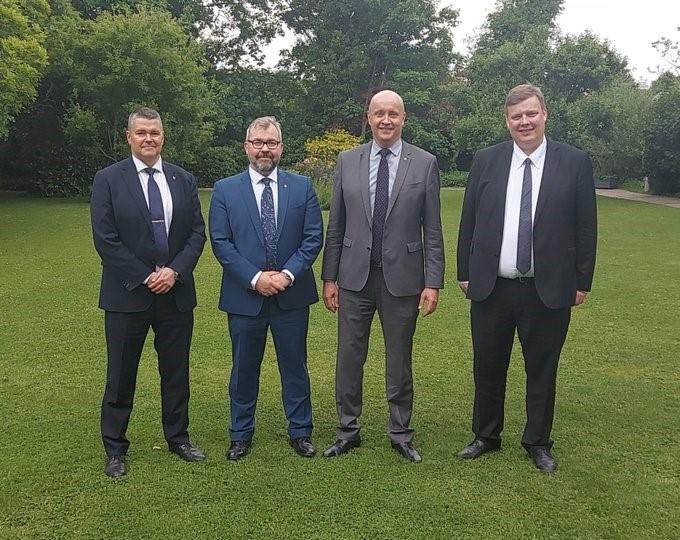 In recent years, governments around the world have begun to increase societal resilience and preparedness work to manage interconnected security risks and complex crises. These range from the climate disaster to migration, disinformation and transnational terrorism to food insecurity, natural catastrophes, pandemics and conventional inter-state war, and beyond.

On 9 June, the Finnish Embassy in London invited UK-based policymakers, civil servants, diplomats, researchers and journalists to hear about Finland’s National Resilience and the Concept of Comprehensive Security. In order to fully embrace the history of preparedness and the ways it is conceptualized in modern days, the seminar included a keynote speech from Mr. Petri Toivonen, Secretary General of the Finnish Security Committee. In addition, the Deputy CEO of Finnish National Emergency Supply Agency, Mr. Rain Mutka, provided a comprehensive view on security of supply in Finland and how the cooperation is developed together with the private sector. Mr. Niko Ristikankare, the CEO of Wega, an independent energy service company, laid an overview on how the changing energy markets affect preparedness through the eyes of private sector. The seminar was held at the Finnish Ambassador’s residence and included opening remarks from H.E. Ambassador Jukka Siukosaari.

Basics of the Finnish Comprehensive Security 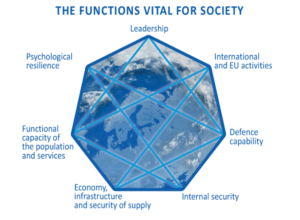 The concept for comprehensive security is a Finnish preparedness model, where authorities, businesses, NGOs, and citizens are jointly responsible for safeguarding society’s vital functions. The aim is that during crisis, the entirety of Finnish Society is able to rapidly mobilize resources where needed, recover quickly, and adapt its functions based on lessons learned. The roots of the concept are in the post-WWII doctrine of Total Defence, where the entire society is mobilized as part of a military defence effort. The baseline of the Concept of Comprehensive Security is described in the Security Strategy for Society (2017). The Model is based on society-wide shared responsibilities with actors in all levels. In the core of the Strategy are seven Functions vital for Society. These include, among others, leadership, psychological resilience and defence capability. However, none of these should be viewed as a separate entity, as all the functions are deeply intertwined. Threats to one function has a knock-on effect to other functions.

Preparedness is a key element in securing vital functions. In its basics, it means activities and precautionary measures ensuring operational capability during disruptions occurring in normal conditions and during emergencies.

In preparedness everyone has a role: The Government is in charge of the overall picture and coordination of efforts in safeguarding vital functions, Authorities, Municipalities and other Public organs cooperate in order to ensure continuity of services. NGO’s provide services, coordinate the participation of volunteers in the activities supporting authorities. The Private sector has increasingly important role in the preparedness process, as businesses operate on the society’s critical infrastructure. Pools operating in connection with National Emergency Supply Agency bring together actors from the Private and Public sector to enhance cooperation and resilience. These include e.g. Digital services pool, Technology pool, Public health pool and Media pool.

Key takeaways and discussions – Role of the Defence Courses

Finnish Model of Comprehensive Security is, in many ways, unique. The Finnish model has been tailored to Finland’s specific needs and capacities ever since the end of the WW II, and adjusted in accord with changes in Finland’s security landscape – Most recently the War in Ukraine, which set bases for Finnish NATO application. Mr. Toivonen from the Finnish Security Committee stresses that each country has their own unique culture, governance, history and experiences, and Finland does not seek to export the concept to other countries, although it can help by providing best practices and lessons learned. 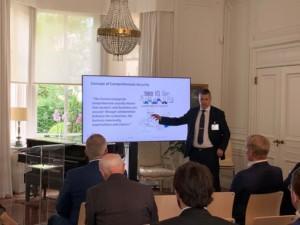 One of the topics that arose a lot of discussion within Finland’s preparedness model was the National and Regional Defence Courses organized by the Finnish Defense Forces. The Finnish Defence Forces have organized National Defence Courses since 1961 and Regional Defence Courses since 1962. Regional Defence courses are currently organized together with the Regional State Administrative Agencies. The Defense Courses provide civilian and military personnel with an overall view of Finland’s foreign, security and defense policy, as well as of the arrangements, readiness and development of the various sectors of national defense and the rest of society in peacetime crises and wartime conflicts. The Defence Courses deepen the understanding of comprehensive security and improve the cooperation between different sectors of society and government institutions. In the courses, attendees learn about comprehensive security, resilience, national preparedness, national legislation and decision-making processes. The courses prepare the attendees about cooperation, and to operate in different kinds of crises, not just in armed conflicts.

Key takeaways and discussions – Building resilience through continuity of services

National Emergency Supply has deep roots in the history of Finnish preparedness and Comprehensive Security. During the last decades, the bases of emergency supply has shifted from stockpiling of goods to continuity of critical services. The Finnish emergency supply is based on two key elements: Emergency Supply Fund, that enables quick reaction to variety of disturbances and crises, and wide network of public and private entities working on issues related to preparedness and continuity of services.

Inclusion of the private sector to societal preparedness is vital, as private entities operate the functions that are critical for society. The objective is to ensure the continued functioning of society as a whole during disturbances and crisis. Private sector operating in the field of critical services take voluntarily and actively part to different kind of exercises together with authorities in order to improve their resilience.

Sector pools, where business and public sector exchange information, take part in exercises and network, have also a vital role in the context of situational awareness. Up to date and comprehensive situational awareness is critical when estimating the effects of societal disturbances and crisis. During complex and interconnected crisis, such as COVID-19 and the War in Ukraine, where globally networked supply chains play essential role, the need for cooperation between public and private entities in forming a comprehensive situational awareness is in many ways vital. ”Private sector has a vital role in the Finnish comprehensive security model, and preparedness will continue to be developed together in the future, too.”, stated CEO Ristikankare in his presentation.

Key takeaways and discussions – Role of the private citizen

Finland has often been described as a promised land for civil society – Sentence that lives up to the expectations. Participation to wide array of courses arranged by different NGO’s, such as Finnish Defence Training Association, Women’s National Emergency Preparedness Association and Finnish National Rescue Association hit the all time high during the spring of 2022 – example that shows us that Finns are not build to sit around and wait. There is a clear will to take part and develop personal skills as well.

The final key takeaway from the Finnish preparedness model is the 72h concept that details the level of home preparedness recommended by the authorities and NGOs for the Finnish households. For example, an extended power outage may result in a situation where society’s services are disrupted or even discontinued. Households should prepare to cope independently for at least three days should a disruption occur. They should store at least three days’ worth of food supplies and medicines. It would also be important to know the basics of preparedness, such as where to get reliable information from during a disruption and how to cope in a residence that is getting colder and colder. Home preparedness is of great benefit to both society and, above all, to each individual themselves. This is why everyone should prepare for disruptions and emergencies. This is how everyone can be prepared.